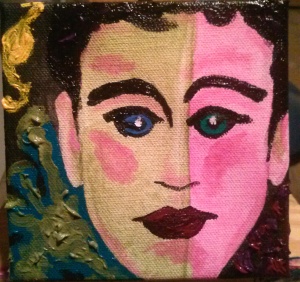 Before I tell people I grew up in a small, rural town called Happy, Texas, I usually dare them not to laugh. But, as you’re probably doing right now just after reading the town’s quirky name, most people guffaw or at the very least, the corners of their mouth creep up in an amused smirk after questioning, “Happy, Texas really exists?!? Are people indeed happy in Happy?” This question is quite predictable. Depending on my mood, I might add that the town has a small billboard along the old 87 Highway that reads: “Happy, Texas: The town without a frown” and that Happy is the home of the Happy High School Cowboys and Cowgirls.

Let me set the scene for you. I grew up in a very sheltered environment. Happy, Texas only has 670-ish residents. Most make a living by farming – growing corn, maze, cotton or wheat – or by ranching – raising cattle, pigs and other farm animals. The town contains no stoplights along the red brick Main Street – not even a blinking streetlight some small towns have at main intersections. Since the grocery store closed in the mid-1980s, the closest food store is 14 miles away in Canyon, the next town over separated from Happy by farmland with cattle. There were five churches in Happy, which serve as centers for worship and community bonding – First Baptist – where my family attends – Methodist, Church of Christ, Catholic and Presbyterian. However, the church count is down to four because the Presbyterian preacher died some years ago, so now that building holds a funeral home. Happy has one elementary, one middle, and one high school from which my parents, aunt and uncle graduated in the 1940s, as well as three male cousins and my brother in the 1960s and 1970s. I graduated with 11 students in my senior class in 1984 – most of whom I’d known since kindergarten – and I was the valedictorian. I didn’t kiss a boy until I was a junior in high school, a boy who was one grade below me, and I got caught the first time I drank alcohol as a senior – amaretto in a white Styrofoam cup at a local baseball game. A boy’s mother snitched on me to my basketball coach (who also attended our Baptist church that banned drinking and dancing) and I had to run 750 bleachers on the football field stands as punishment under the withering glare of my coach’s disapproval. Of course, I went wild later in college as many sheltered kids do once on their own, but you get the Happy, Texas picture, yes?

Being the studious bookworm I was from kindergarten through high school, my mom fully planned to enroll me in summer school at West Texas State University in Canyon, Texas the summer after graduating Happy High School and before entering Texas Tech University in the fall. The wife of the Happy boys’ basketball coach knew I had an affinity for art and suggested I take a live model drawing class at WT – my first art class. I don’t remember the professor’s name, but what he told the class the first day has stuck with me, “You can think of the naked body as Playboy or as Rembrandt.” It was like a light switch clicking on in my brain! The human body is a thing of wonder and beauty – there’s nothing wrong or salacious about studying a nude figure and sketching its form.

Some of the models – both male and female – that summer chose to remain partially clothed in their underwear or a unitard. Others, more brave or needing the higher paycheck, chose to model nude. The professor taught us about the various colors hidden beneath the surface of skin tones – blues and purples of black skin, yellows and pinks of light skin. I used chalk pastels on rough sketch paper, which made it easy to blend the colors with my fingertips, squinting my eyes as the professor had taught to discern the hidden skin tones and translate them to my drawings. One day we were asked to focus on one body part of our choice of a lovely, quiet, thin female model as she lay nude on the raised platform in the middle of the art studio. I focused on one breast and concentrated on the gentle curves, semi-erect nipple, and soft skin tones of pink, lavender and yellow. I became totally obsessed that summer with her grace, straight posture, thin frame and quiet elegance, starving myself to be as skinny as possible to mirror her feminine form.

And then…my first naked boy. Toward the end of the semester, our model was a short, slight young man with a black curly mullet. He chose to model nude and reclined fully outstretched on his side atop the raised wooden platform – his head resting in his right hand with elbow propped on the stage, right leg outstretched, the left bent at the knee with that foot planted in front of the resting leg’s knee, private parts fully exposed and relaxed as if he were on a bed lazing on his side watching TV, serene expression on his blank face. In my mind, I thought, “Oh boy, here we go. Just breath.” I settled in on my wooden sawhorse, sketchpad turned to a fresh sheet, charcoal pencil at the ready when the professor approached me from behind and firmly said, “Please rise and follow me, Miss Todd.” He proceeded to drag my sawhorse across the cement floor noisily echoing in the warehouse-like studio while I silently followed behind clumsily carrying my sketchbook, charcoal pencil, gum eraser and pastel chalks in my arms, bewildered as to the new location my professor was about to select and why I was chosen out of all the other art students to make such an abrupt shift. Then I understood. My heart sank into my stomach, but I remained mute asking no questions nor offering any protests. The professor ceased the echoing clamor of my sawhorse directly in front of the naked male model and loudly pronounced to the class and the nude boy, “Miss Todd will sketch from the front today!” I guess I hadn’t realized my habit of positioning myself in “safe” angles throughout the semester as the professor obviously had…

Mortification…face turning color of summer tomato…sweat beading…shortness of breath. I screamed a silent self-admonition in my mind, “Suck it up, Buttercup! So what if this is your first penis sighting? You want an A in this class, right?!? Think Rembrandt and start sketching!” So, I obediently and quietly took my new sketching position directly before the nude model’s genitals and carefully measured the exposed body parts with squinted eyes and pencil in outstretched hand as we had been taught to do to determine correct proportions (not very impressive as I recall). This was a shocking and fabulous experience I’ll always remember. I still use those same proportion measuring techniques when sketching today, and I still see the nude body as a form of beauty and wonder when visiting museums.

However, a mystery remains. What ever happened to the full-frontal male model sketch from my first art class in 1984? As I recall, all of the works from that class were placed under my bed in my room at my parents’ home in Happy. I fished them out a few years later during my undergraduate career curious to remember what I had drawn during that course, but only found the sketches with partially clothed models. I know I didn’t chuck the missing sketch in the trash, so I asked my mom, “Did you throw any of my drawings in the garbage?” She stoically threw the question back at me. “No, why would I get rid of any of your artwork? You must have trashed them yourself.” “Would Daddy have come in my room and gotten rid of the naked drawings, then?” I asked with growing alarm. My mother vehemently denied this accusation as well. I dropped the conversation, but assuredly thought to myself that something was amiss. I knew without a doubt it had to have been one of my conservative parents who purged my bedroom of the perceived salacious artwork. Ah well, at least the memory of that impactful first live model art class – and my first naked boy – is etched clearly in my mind.

Fun clay day! My bas relief, The Threshold (18 x 10 x 8), has been accepted to the Artless Bastard Gallery group juried show in DePere, WI and took off both legs, hollowed everything out and put back together the bottom half of Amelie. Let her set up before getting into more detail 🌷🐞🦋💕🌻🎨🌺
Cutting Amelie into parts to make her lighter and easier to work on. I have an idea of how to finish her as a symbol of resilience...fingers crossed! 🤞🤞🌷
Courageous Dream Weaver is done! She's definitely not a dreamer of dull dreams! 🌷🌸🌺🌼🌟